And I don't have time to go back and replace them right now (or ever, probably). Here's babies on the Fourth of July! 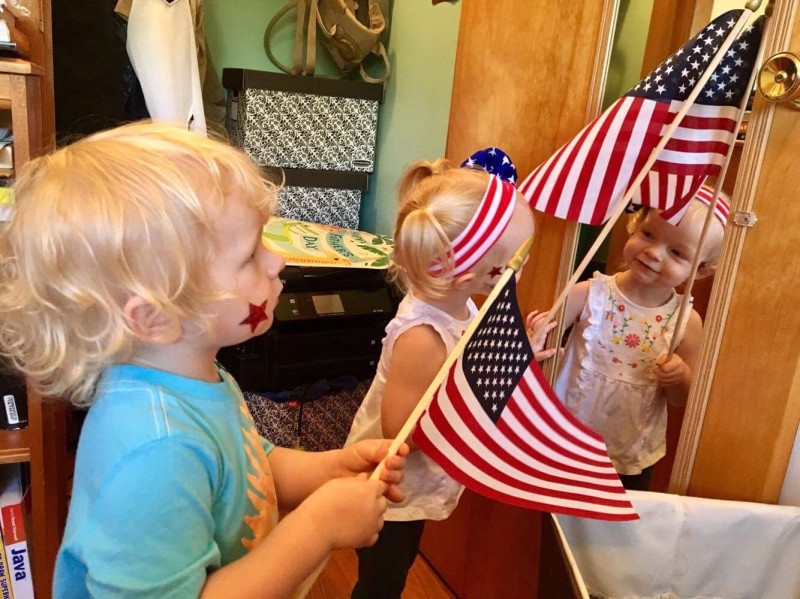 I'm mostly only on Facebook these days. If you want to find me there, leave a comment (screened) and if you're a person I recognize I'll give you the link. But I think almost everyone's gone already.

They say the internet is forever, but really it's not. Nothing is forever. 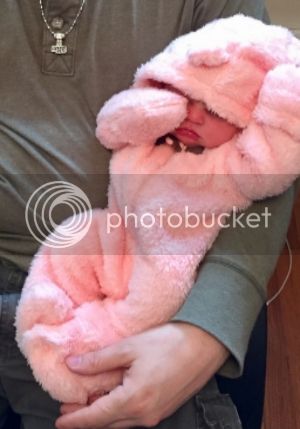 (Hey! I haven't been around at all, not even reading my friend's list. I hope everyone is doing well.)

... is automatically avoiding all danger of becoming a Smug Overprotective Parent of One Child type.

Not that all parents of one child are like this, or even the majority, or probably anything but a teeny-but-annoying minority! But I seem to be running into a lot of them lately! Particularly online, where you can find them solemnly informing everyone who will listen that they would never take their eyes off their child long enough to let it get attacked by a wild boar, or that the parents of that poor girl who got attacked in a bathroom weren't being responsible, and that unlike those people THEY always accompany THEIR child to a bathroom when out in public!!!111

But what if you have... more than one child? you ask. At this point, one can imagine the look of slowly dawning horror spreading over their face as they somehow become aware for the first time ever that such a thing is possible. Then (I imagine) they gradually raise their hands in front of their face and gaze at them sadly like the rock biter in The Neverending Story, suddenly aware of the sheer vastness of the unknowable universe and also the concept of plurals.

Then their heads explode? I assume. Usually these brave parenting warriors only give out their opinions on facebook I just have to go by guessing here.

I ended up posting about Marcy on a rescue site devoted just to Ragdoll cats, and got a lot of responses. They all started out using language like "We wuv your kitty! Is she ready for a forever home? xoxoxoxo!!" and then I'd write back and explain some of her issues and they'd NEVER REPLY. But finally one lady wrote who wasn't flaky and who wanted it for her daughter who lives alone and said she could give Marcy a lot of attention, and I got enough information on them to make sure that she wasn't secretly collecting ragdolls to start a ragdoll circus or something, and she was talking about all the kitty stuff they'd bought and we arranged a date and I was expecting them to flake out right to the last second and then... they turned up. So yeah, no more Marcy at our house.

And now, predictably, I'm feeling sad. Not regretful or anything, just sad that we won't have that demented animal around anymore. I have the new owner's contact details and I'm holding back right now from spamming her phone asking how Marcy is going. I want her to feel like Marcy is 100% her kitty now and not like I'm going to show up at her house at 3am yelling for my animal back.

We did make it very clear that if they had a problem with her they could take her back here, so who knows.

She's just the worst, guys. Her biggest flaw (out of many) is that she refuses to eat without encouragment and supervision. Which means that at least four or five times a day she'll come up to you meowing demanding that you lead her over to her food. When you do that, she'll indicate in cat body language that this food is more than 30 seconds old and therefore not up to her standards. If you give up on getting her to eat the old food and go get a new can for her, and then attempt to resume what you were doing, she will stop eating the food and follow you to your new location. AND THEN START MEOWING FOR FOOD AGAIN.

This wouldn't be that terrible if she didn't have the worst "I'm hungry" timing available, like when I have just sat down to nurse a baby. 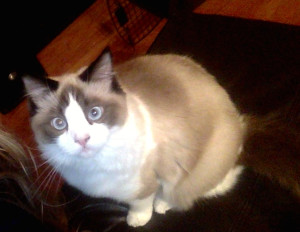 The other major issue is her dog-like levels of neediness. ( Collapse )

Babies love to imitate. I remember I was reading once about this experiment where a couple decided to raise their child alongside a chimpanzee so they could figure out which of the human/ape differences were innate (it was the 1930s, all right, parents were weird back then) and they eventually shut down the experiment because they found that rather than the ape picking up human behavior, the son was imitating the ape. Human babies are just really great at imitating even though they mostly just look like drooling potatoes.

What's really great is when it comes to speech. I knew about babies babbling and all that, but until I had these particular babies I never realized that they'll have entire conversations with you in potato-speech (or at least mine do. I have no idea if I have freak babies). It'll be like this:

YOU: Hello, baby! How are you!

After a while I realized that the baby isn't just practicing speech, it thinks it's participating in a real, equal conversation. It hears all these adults around it talking, and of course it can't understand because it's a baby, so it just hears a bunch of meaningless syllables. So even though it can't physically produce anything more than meaningless syllables, it totally thinks it's joining in and beating the adults at their own game.

What's REALLY great is when you have twins, occasionally they'll get caught in this meaningless-syllable feedback loop and start having a conversation with each other:

I thought I'd start posting a bit more here, even though it's Livejournal and there are probably only 6 people reading it anymore and 5 of those are Russian spambots that have secretly gained sentience somehow. I planned and tried for a long time to do everything I used to do here on Tumblr, but it's never quite worked out, because whenever I write something on Tumblr I just get afraid that someone is going to reblog my post with a note underneath proving that what I wrote was racist, because this seems to comprise about 80% of the activity on Tumblr (the rest is porn gifs).

Anyway, I thought I'd start with a link to one of my favorite short horror stories, Thurnley Abbey. I post it here because it's become apparent that it's one of those hipster horror stories that no one has ever heard of. Whenever someone writes an introduction to it they always talk about how super mega anthologized it is, and yet even the people I know who own a whole shelf of horror anthologies don't seem to have read it. I'll put the reasons I like it under a cut, because it's online behind that link and you really should read it before I spoil it for you. GO READ IT NOW.